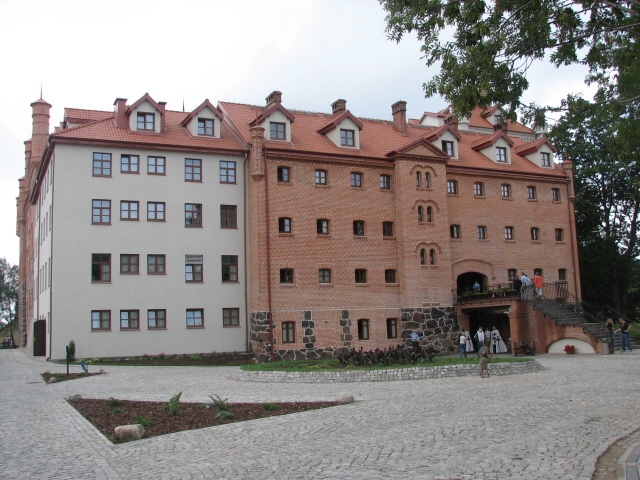 Ryn is a charming Masurian town, located on the isththusk of two lakes, Ołów and Ryński, on the route of the Great Masurian Lakes. Above the city is a 14th-century Teutonic castle founded by grand master Winrych von Kniprode, who in 1379. he made the famous boat trip from Ryn to Malbork. The castle was one of the most important in the chain of fortifications in the east of the Teutonic State. It was the seat of the chamber and was built as a convent castle – a “fortified monastery”. It was intended to function as the seat of the monastery, provincial authorities and knight’s fortress. He served both for defense and for trips to Lithuania. In 1418 in the castle armory there were 22 guns, 72 crossbows and 14,000 belts. In addition to his military function, the castle also served as an administrative and economic minister, supplying the order m.in. in flour, fish, honey and wild game meat. The fishing authority set up here had boats and as many as nine vessels. At the castle there was a large farm house where horses were bred (in 1418 there were 187) and other animals. Cereals were grown here, honey was collected from forest apiaries. For the purposes of the Order worked a mill, which used the difference in water levels in the lakes. In the years 1412-1420 there was an iron works. The castle’s crew numbered about 10 000 people. 50 people not counting the employees of the farm. The first character was Frederick von Wallenrod, brother of grand master Konrad von Wallenrod, who was the original character of adam Mickiewicz’s poetic novel. According to legend, the castle and lake Ola, which is a natural moat, resembled the Teutonic River Rhine (Rhein) and the castles standing above it, hence the name Ryn.

Mid-15th century the castle was conquered by the insurgents of the Prussian Union. In Teutonic possession, the castle returned after less than a year, recaptured by heavy troops. With the castle developed a settlement (podzamcze), which gave rise to the future city. At the end of the 15th century. the right of the fair estate, which contributed significantly to its development. In the 16th century, After the liquidation of the Order, the Old Prussia Princes Was created here. In the first half of the 17th century, the castle was expanded, the south-west wing with gate passage and the north-west were added. The fourth north-east wing dates back to 1883. A circular turret containing stairs has been added to the existing Gothic wing. The Castle of Ryna in princely times was the seat of the princely hunter, and the Old Town of Riga supervised the hunting and forests of the whole of Prussia. In the mid-17th century, Tatar invasion stopped the development of the Gutter. The invaders took some of the inhabitants in jasyr, the rest were murdered, ravaged and burning the settlement. Half a century later, the plague epidemic wreaked great havoc on the settlement and the region. In 1723 Ryn received city rights. This was to facilitate reconstruction and provide an obstacle to further development. In the 19th century, the castle served as a prison for women, and during World War II it held Russian, Polish and German prisoners.
Riga Castle has its secrets. It is known from the messages that the Riga castle had a tunnel connection with the de-existed Gothic church and with the so-called . Komtura House. The story of officer Vermacht’s escape through a tunnel from the prison cell of the castle to a nearby forest, confirms the existence of longer strategic and evacuation tunnels going beyond the city. According to legend, it also haunts the walls of the Teutonic castle. Here comes the spirit of Princess Anne, wife of the Duke of Lithuania Witold, who promised the Teutonic Crosses that in the decisive phase of the Battle of Grunwald he would go to their side. He made the promise in Ryna, where he came with his wife Anna and their children. At Grunwald, Witold did not betray and fought to the end on the side of Jagiełły. The Teutonic Men bricked Princess Anne and her children alive in emover. Since then, after dark, her spirit has strolled through the chambers, mourning the murdered children.

Since July 2006 in the castle there is a 4-star exclusive Hotel Zamek Ryn, meeting the expectations of the most demanding guests. The area around Rynu is famous for its beautiful nature. Undoed, hilly terrain, picturesque lakes full of charming bays and peninsulas, with a multitude of interesting corners emphasize the uniqueness of this place. In addition to comfortable rooms and fine cuisine, guests can enjoy numerous attractions and secrets. Hotel Zamek Ryn is bustling all year round. Family holidays and weekends, as well as Christmas and New Year’s stays, are organized here. The hotel has a well-equipped Conference Centre, where conferences and trainings are held for companies from all over Poland.
The extensive wellness and spa facilities will allow guests to relax luxuriously. Local specialties and drinks can be enjoyed at the castle’s stylish restaurant and wine bar. Visiting the castle with a guide we will learn its history, and an additional attraction will be participation in a big knight’s feast. In the castle courtyard, the participants of the feast in stylish costumes from the era will move into the Middle Ages. Shows of knight’s struggles are accompanied by tasting of dishes based on the recipes of the castle cuisine. In Podzamcz in the former castle mill there is a Guest House Ryński Młyn, where you will find the Smaki Mazury shop and a restaurant with Old Polish cuisine.

ATTRACTIONS IN THE HOTEL AND THE SURROUNDING AREA

The hotel has: bowling alley, bike rental, tennis, fitness room, castle casino, underground pool, sauna, princess Anne’s spa, billiards room, toddler club, wine bar. The hotel organizes guided tours of the castle and knight’s feasts. You can also take a flight by balloon, plane or motoglider, go on a bike or off-road trip, take part in diving, sailing or fishing, or swim one of the castle’s speedboats. Nearby is a guarded beach with water equipment rental, ecomarina, walking and cycling route around Lake Owl and observation tower.

Guided tour of the castle:

During the holidays every Thursday: admission to Knight’s and Teutonic Feasts, tickets for children 5-12 years – 60 PLN, adults – 99 PLN, children under 5 years – free