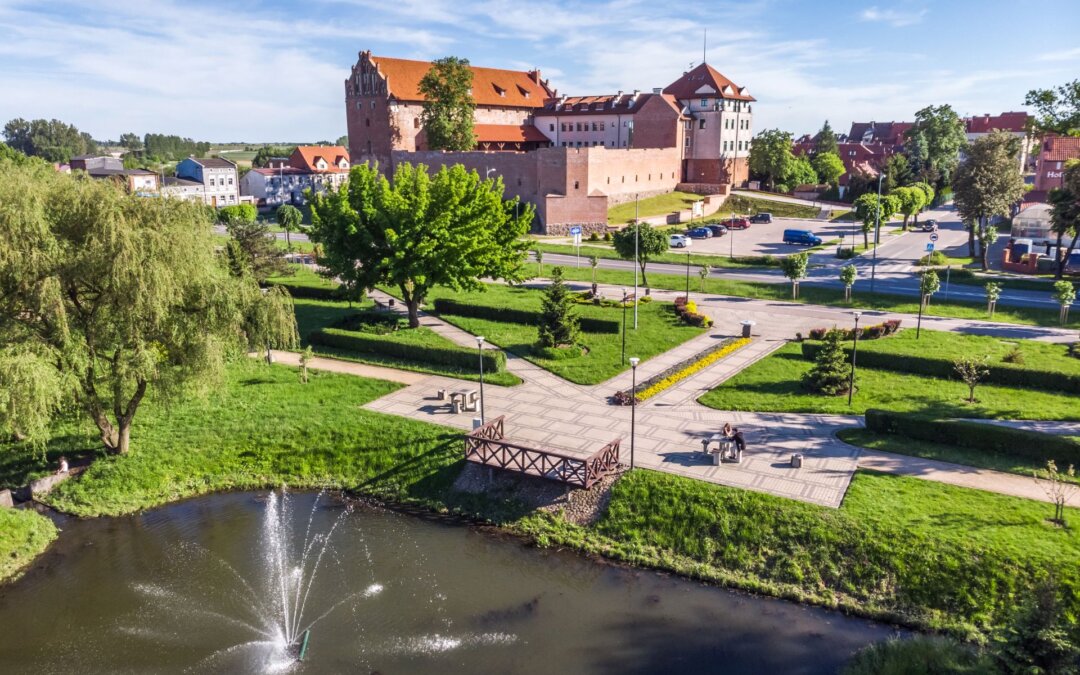 Działdowo is a town located on the historical Prussian-Mazovian border, today belonging to the southern part of the Warmia-Masuria voivodeship. The origins of the Department are connected with the appearance in this area of knights of the Teutonic Order. The department, which until then was subject to the Mazovian princes, was sparsely populated. After its acquisition, the Order began an intensive colonization action, which was led by  Dzierzgoński Komtur, and later grand master Luther of Brunswick. In 1344, grand master Ludolf König staged a placement for the city of Soldov.

The development of the city in the Middle Ages was hampered by repeated hostilities, which, due to its borderline location, often affected the city. Działdowo passed into the hands of the invaders several times, wreaking havoc and destruction. The most serious losses the city suffered as a result of the invasion of the Lithuanian Prince Kiejsthut (1375-79), the so-called Great War of Poland with the Teutonic Order (1409-11), the Thirteen-Year War (1454-66) and the Prussian War in 1520. This stage of The Department’s history ended the Kraków Treaty of 1525, under which the religious state in Prussia became a secular duchy, dependent on the Republic. The local population, in accordance with the principle of “cuius regio, eius religio”, accepted the Protestant faith.

During the Polish-Swedish Wars in the 17th century, King Charles X gustav of Sweden stayed in Działdowo for several months, receiving seven-fold, Russian and Turkish deputies at the castle. In 1657, gabriel Wojnaiłłowicz’s Tatar troops invaded the city. Nevertheless, since the beginning of the 18th century, under the rule of the Prussian Kingdom, Działdowo has experienced a period of flowering, the main factor of which was the location of the city during the commercial period from Warsaw to Gdańsk and Königs reigned. On the way to The Manor, the largest cattle markets in the Prussian Kingdom were held, for which general halls and horse markets were spent. At the end of the century, Działdowo twice fell victim to fires in which almost all urban buildings were burned down. From 1806 to 1807, Napoleonic troops were stationed in Działdowo. Forced quarters, contribution, taxes and the self-will of soldiers have destroyed the local economy. In the 19th century, a municipal hospital and a fire brigade were established in Działdowo, at the end of the century railway lines were built (to Malbork, Mława, Grudziądz and Olsztyn), the Catholic Church of St. Paul. prison, slaughterhouse, dairy and military barracks. In the years 1910-1912, sewers and water works were built in the city.

From 18 January 1871 Działdowo was located within the borders of the German Reich. During the First World War, has often been the subject of fighting between Russian and German troops, and between April and June 1915. was repeatedly bombed by Russian aircraft. After the war, as a result of the decision of the Paris Conference, in accordance with the provisions of the Treaty of Versailles, Działdowo and the surrounding villages were annexed to the Second Republic. In the interwar period, the city was an important center of Polish action in Masuria. An important social function was performed by organizations and institutions: The Masurian People’s House, the Masurian Museum, the Masurian’s Association and the Polish-Masuria Evangelical Society.

During the Second World War, in the former Polish military barracks, there was a Nazi poaching camp, followed by the Selbstschutz camp, a transitional camp, educational labor camp and a prison camp. The german occupation ended in Działdowo on the night of January 17-18 in 1945, when the 29th Armored Corps, part of the 48th Field Army of soviet troops, entered the city and The Gun was again within the borders of Poland. The new authorities introduced Działdowo into the reality of the Polish People’s Republic. In May 1990, after the transformation of the country’s system, national councils were abolished and a local government sejm was established. The office of mayor was re-created, which was taken over by Ryszard Duda in Działdowo.

The history of The Department is presented by one of the permanent exhibitions of the Borderland Museum:  “Działdowo – the city and the people of the former borderland”, housed in the department of the castle.

The Teutonic Cross began construction of the present castle in the mid-14th century. It was built on a hill, surrounded on three sides by swamps, which is the highest place in the area. The zipper was made on a square plan with a side of 46 m. He was the first to stand so-called. Large House, the only part preserved to this day. The quadrilateral courtyard was surrounded by walls with towers, a gate tower and further wings were added. By the end of the 1940s, 14th century there was a forearm with a bridge, an additional line of walls and a forearm with its own walls, tower, gate, moat and out-of-town buildings.

The Teutonic Castle became an important border fortress, which is a base for attacks on neighboring Mazovia and is one of the links of the chain of border defense fortifications of the Order. The castle was hosted by great masters, meeting with Mazovian princes, and here were also held Mazovian-Teutonic courts. In 1410 for a time the army of King Władysław Jagiełło, who went to Grunwald, took over the fortress. During the last Polish-Teutonic War, the gun castle and the city were captured by Polish troops and remained under their rule until 1525. After 1525 and the incarnation of The Gun to Prussia, the castle became one of the representative residences of Prince Albrecht Hohenzollern. During this period, the building began to take Renaissance forms. The project for the reconstruction of the fortress was entrusted to Master Blasius Berwart of Königsliev.

In 1656 During the “Swedish Deluge”, Karol X Gustav organized his headquarters in Działdowo, where he took deputies from Russia, Turkey and Transylvania. From this period (1676) come drawings and designs of Piotr Lemke. From these projects, in addition to the appearance of the castle, we also learn about the purpose of individual rooms. It follows that the old Teutonic kitchen continued to function, and on the first floor of the Large House a chancellery and a chapel. On the ground floor in the north-east wing there was a bakery, a brewery and a salt warehouse, and on the first floor a representative hall (already known for E. Dahlberg’s copper plate). The south-west wing was entirely a residential wing. In addition, the castle had: law firm, granary, malthouse, stables and barns, officials’ apartments, as well as a prison. In the middle of the castle there is a castle garden. In good condition there were still buildings and hems with bastions and a drawbridge on the foreman. This remained so until the end of the 17th century.

From the second half of 2008, the 18th century the castle began to fall into disrepair, and the greatest damage occurred during the Napoleonic Wars. After the wars, the vault in the ground floor room of the Large House collapsed. In 1850 two side wings and two towerings were dismantled. In 1868, the storey of the main building was burned down. Renovation and construction of the castle was undertaken only in the 1970s. 20th century In the early 2000s, the west wing, the walls around the courtyard and the entrance gate were rebuilt. Currently, in the rebuilt part of the castle is the seat of the City Hall of Działdowo.

In 2018, after the implementation of the project “Development of the Gothic part of the Teutonic Castle in Działdowo”, the oldest part of the fortress, where the border museum was given its new headquarters, was put into operation again. Inside, a permanent museum exhibition entitled “Department – city and people of the former borderland”, rooms for temporary exhibitions and events, workshop halls, historical library and tourist information. The walls around the castle courtyard and part of the corner tower on which the observation deck was built have also been reconstructed. and cloisters adjacent to the Big House.

Groups of more than 10 people are asked to book in person at the Museum’s Counter during office hours (ground floor), to the e-mail address: [email protected] or by phone: 23 697 23 32. 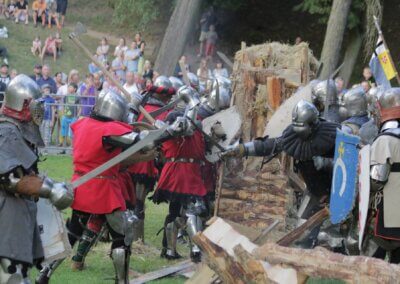 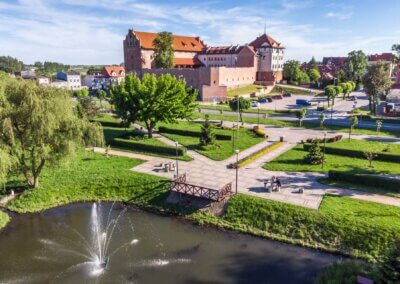 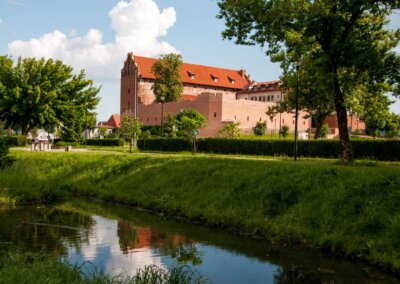 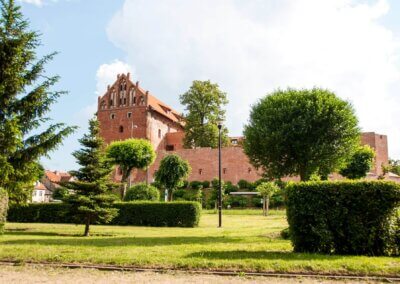 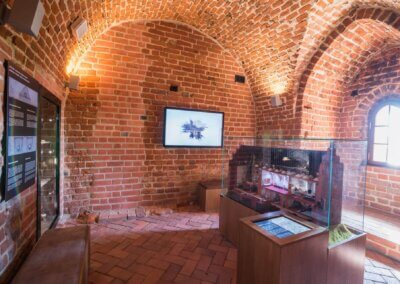 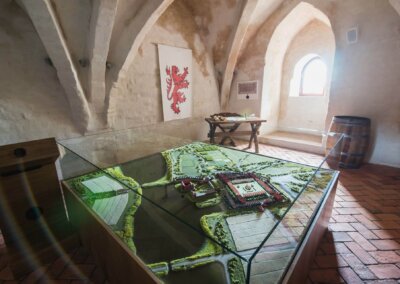 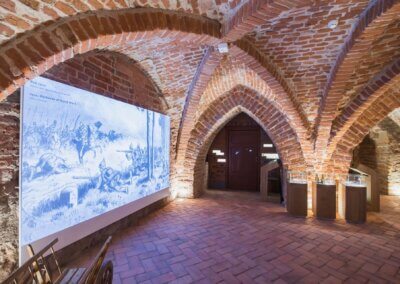